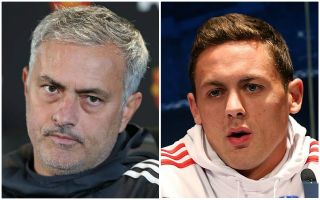 Manchester United midfielder Nemanja Matic appeared to aim a subtle dig the way of his manager Jose Mourinho in the middle of their pre-Champions League press conference together.

The pair were speaking to the media ahead of United’s clash with Valencia on Tuesday night, in what looks a hugely important match for the club.

However, rather than looking truly United, the tension seems to be as bad as ever, judging on the noises made by Mourinho and Matic this afternoon.

Quoted in the live coverage of the press conference by the Daily Mirror, Mourinho spoke first and discussed the mood and attitude of his players.

‘Some players care more than others,’ the Portuguese tactician said.

Mourinho: “I think that some care more than others.” #mufc [ITV] pic.twitter.com/QLDIL6VPzq

Later, when it was Matic’s turn to speak, the Serbia international suggested he did not agree with that statement from his boss, saying: ‘I don’t believe any player goes onto the pitch to not give his best.’

Jose Mourinho on United players – “Some care more than others.”

Apart from that, the former Chelsea midfielder called on players to turn things around and admitted he had a bad game in the 3-1 defeat to West Ham at the weekend, as quoted below by Kris Voakes.

Matic: "We played badly on Saturday but I don't believe any player doesn't give his best. I believe I played one of my worst games for #MUFC but I look in the mirror and ask what I did wrong and everybody does the same."

United got off to a winning start against Young Boys in their last Champions League game but have since drawn with Wolves, gone out of the Carabao Cup on penalties, and lost to West Ham in the Premier League.