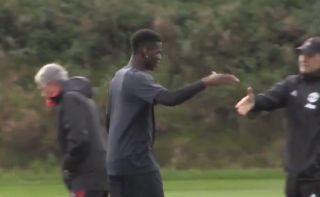 The France international can be seen in the video below shaking hands with a number of players and coaches, though he seems to avoid going over to Mourinho.

All was clearly not well between the pair last week, and the damage is unlikely to have been repaired by the 3-1 shambles at West Ham at the weekend.

After that game Pogba signalled he was still not happy with his manager, having previously criticised the team’s lack of attacking tactics against Wolves.

When asked what he thought this time he simply responded: “What? You want me dead?”

The #mufc players took part in an open training session this morning at Carrington ahead of the Valencia match on Tuesday. pic.twitter.com/nFhVpxaHoe

United take on Valencia in the Champions League next and some reports are circulating that Mourinho has just two games to save his job.

The Red Devils urgently need to improve results fast, with Zinedine Zidane being linked as a potential replacement in the Old Trafford dugout.