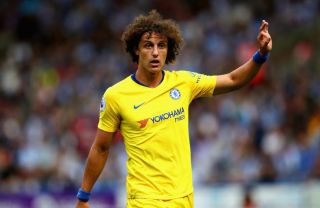 As he continues to enjoy a pivotal role under Maurizio Sarri, Chelsea ace David Luiz showed a classy touch off the pitch over the weekend too.

The Brazilian ace has been a fundamental part of the Italian tactician’s plans so far this season, and he was key again in the draw with rivals Liverpool at Stamford Bridge on Saturday evening.

However, his night wasn’t over after the game, as seen in the images below, where he was spotted attending his restaurant Babbo in Mayfair and met Chelsea fan Carol Ann Wood celebrating her birthday.

It will undoubtedly remain a memorable one after being greeted by the 31-year-old, as he was more than happy to pose for photos and enjoy the celebrations.

During both his spells with Chelsea, Luiz has certainly established himself as a fans favourite, and with gestures like this, it’s not difficult to understand why.

Nevertheless, he’ll be hoping to deliver the best possible late birthday present to Wood and the rest of the Chelsea faithful by sustaining the club’s impressive start to the campaign and securing trophies come next May.

If Carlsberg did birthday parties … well I went to David’s party so he decided to come to mine. All a well-kept secret. What a guy! ???? pic.twitter.com/NPA85PoojT