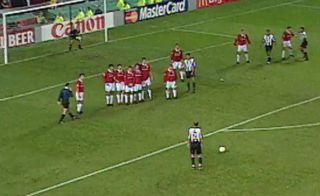 As talk hots up that Zinedine Zidane could be the next Manchester United manager amid Jose Mourinho’s struggles, the Champions League Twitter account have reminded us of this moment.

Watch the video below as Zidane silences Old Trafford with a stunning free-kick for his club at the time, Juventus.

The Frenchman went on to shine at Real Madrid, becoming regarded as one of the finest players of his generation.

Turns out, he’s a pretty good manager too, and the Sun report Mourinho is worried about the 46-year-old replacing him at United.

Zidane left his position at Real Madrid in the summer after three Champions League final victories in a row, achieved in less than three full seasons in charge.

United fans weren’t too pleased when he struck this majestic effort against them 21 years ago, but were he to rock up at Old Trafford now he’d likely be very warmly welcomed.

The Red Devils have looked poor under Mourinho this season and it seems it’s time for a change.