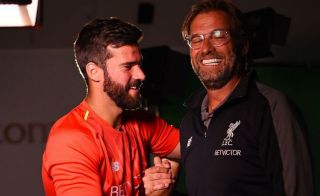 Liverpool shot-stopper Alisson says that Jurgen Klopp consoled him in ‘the best way possible’ after his mistake at the King Power Stadium last month.

The Reds won 2-1 against Leicester City on September 1st, thanks to goals from Sadio Mane and Roberto Firmino but they were made to sweat for the three points after the Brazilian’s error in the second half allowed Rachid Ghezzal to score.

The 26-year-old was dispossessed by the 16-yard box after attempting to take the ball past a Foxe’s attacker, which ultimately allowed them to halve the deficit in the match.

Alisson has been extremely impressive between the sticks for Klopp’s men aside from that incident, providing an assured and dominating presence for the team at the back in the opening two months of the 2018-19 campaign.

According to Metro Sport, when looking back on that incident in an interview with reporters on Tuesday, the Reds number one revealed exactly what his manager told him after the game, before going into greater detail on their relationship at Anfield.

“[After Leicester] he came into the dressing room and started joking,” said Alisson.

“He dealt with it in the best way possible, since I already knew I’d embarrassed myself.

“Then he told me not to lose faith and to carry on playing that way.

“I’ve admired him for a while, since his [Borussia] Dortmund days.

“I like being coached by him because he doesn’t say much, but he always knows what to say and how to say it.

“He’s an intelligent man with character.”

Liverpool take on Napoli in the Champions League on Wednesday, hoping to pick up their second successive win in Europe after a 3-2 victory against PSG on matchday one.

All smiles in Napoli. ?

Supporters will be hopeful that the team can do the business in Italy and the Alisson continues to prove his worth in goal to keep out the slick Serie A outfit, who drew their opening game against Red Star Belgrade in Group B.