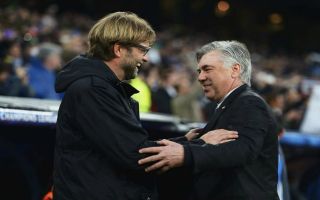 Liverpool manager Jurgen Klopp has dismissed Carlo Ancelotti’s praise for him as a ploy to soften him up, as he prepares his team to play in Italy.

Ancelotti will take charge of Napoli against the Reds at the Stadio San Paolo on Wednesday night as the two teams meet in the Champions League group stage.

Liverpool won their first game in Group B two weeks ago at Anfield against Paris Saint Germain, in a thrilling contest which finished 3-2 to the home side.

Napoli meanwhile, laboured to a 0-0 draw against Red Star Belgrade in Serbia, which means they cannot afford to drop any more points against Klopp’s outfit in their bid to qualify for the next round of the competition.

According to BBC Sport, Ancelotti proclaimed Liverpool to be one of the best teams in Europe in an interview this week, which Klopp has taken as part of his mind games ahead of the clash in Naples.

“I like Carlo Ancelotti. In Germany, we say he’s a smart fox,” said the German head coach, as per BBC Sport.

“He’s said very positive things about us and nice things about me before a game. It’s nice, but it’s tactics. Carlo is so long in the business.

“We’re ready for a real battle.

“I don’t care too much for what people say about us or how they see our situation.

“This is a fantastic manager, a fantastic team and an emotional crowd so that will be a real challenge.”

Liverpool come into the match off the back of a 1-1 draw against Chelsea in the Premier League on Saturday, which maintained their unbeaten start to the season, while Napoli succumbed to a disappointing 3-1 defeat against Juventus in Serie A on the same day.

The Reds will be favourites to take all three points tomorrow evening but the Partenopei Gli Azzurri will be no pushovers given their status as the second best team in Italy at the moment.