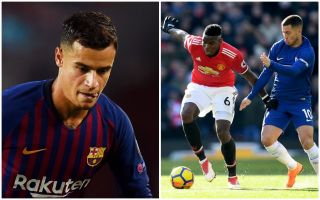 Barcelona players have reportedly picked up the message that Manchester United midfielder Paul Pogba is looking forward to a transfer to the Nou Camp.

This is according to Don Balon, who state Philippe Coutinho is among those to have learned of Pogba’s plans as his agent reportedly looks to do everything he can to get him a move this January.

Despite Pogba’s struggles for form with United, he has shown time and time again that he’s a top talent when given the right players and tactical set-up around him.

The 25-year-old was superb during his Juventus days before earning his big move to Old Trafford, and he also lit up the World Cup with winners France this summer.

Barcelona need a midfielder of his spark and talent after losing big names like Xavi and Andres Iniesta in recent years.

Paul Pogba continues to be linked with a transfer to Barcelona

It remains to be seen if a deal can be done, with Don Balon noting that other clubs could also still swoop in for the unsettled Red Devils ace.

Still, this seems an exciting transfer update for Barca fans as it seems Pogba himself is to some degree gearing up to make the move to the club as soon as possible.