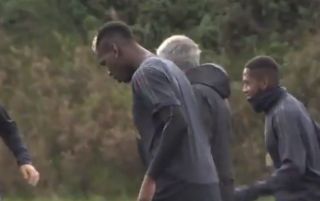 Things looked awkward once again between Paul Pogba and Jose Mourinho during Manchester United’s training session before the Valencia game.

Below is a video clip from the Manchester Evening News of the pair seeming to avoid each other slightly, though it’s not immediately clear if they may have acknowledged each other outside of that shot being filmed.

In the footage we get a look at here, Pogba can be seen entering training and shaking hands with a number of players and coaches, though he stops short of going over to his manager Mourinho.

The #mufc players took part in an open training session this morning at Carrington ahead of the Valencia match on Tuesday. pic.twitter.com/nFhVpxaHoe

The Daily Star reported on this describing it ‘awkward’ and a ‘snub’ from Pogba towards the Portuguese tactician, and it certainly does seem a tad tense, even if nothing nearly as bad as last week’s incident.

Sky captured that frosty exchange in United training, and the video instantly went viral due to the obviously unhealthy looking body language from Pogba in particular.

United have been on a rotten run of form lately and will need to lift their game if they are to beat Valencia in the Champions League and avoid more negative headlines and doubt over Mourinho’s future.