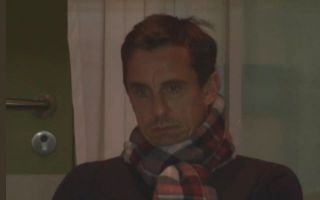 Man Utd toiled in the first half against Valencia in their Champions League clash on Tuesday, and club legends David Beckham and Gary Neville didn’t look impressed.

The pair were in attendance at Old Trafford for the game, and along with the United faithful they would have been hoping for a positive reaction after the defeat to West Ham United at the weekend.

While there was undoubtedly a bit more energy about the hosts, particularly in the early stages as they made a bright start, it didn’t last long as they gradually lost their way and were unable to sustain any real pressure on Valencia.

Further, they looked vulnerable on the counter attack, and so it certainly wasn’t the convincing display that many had been hoping for.

In a game devoid of any real quality in the final third, from both sides, coupled with United’s inability to dominate the encounter and take the game to their rivals, the expression on Beckham and Neville’s faces say it all with many fans understanding their plight, as seen in the tweets below.

Beckham and Neville watching on at Old Trafford. #mufc pic.twitter.com/zIsG5MYT5E

And they are not happy at all

José has turned United into a source of severe pain and sadness.

They look as happy and entertained as the rest of us.

Expression says it all