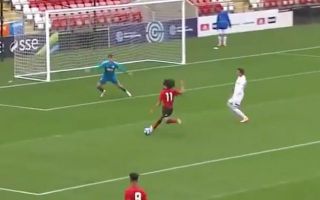 Man Utd U19s secured a 4-0 win over Valencia U19s in their UEFA Youth League clash on Tuesday, and Tahith Chong’s goal certainly got a reaction from fans.

It’s two wins in two for Nicky Butt’s side as they continue to impress, with Josh Bohui, Mason Greenwood, Chong and Millen Baars all getting on the scoresheet.

That leaves United’s youngster at the top of Group H on goal difference, as they will of course hope that their impact at this level will eventually grab the attention of Jose Mourinho for a potential promotion to the senior squad.

Chong’s goal was undoubtedly the pick of the bunch, as seen in the video below, as the United U19s played a brilliant move out from the back to create the opening and the talented youngster made no mistake with his emphatic finish.

It’s a far cry from the style of play seen with the senior side as they continue to toil in the Premier League this season, and as well as Butt getting a few fans suggesting he should be handed a promotion, many were left baffled as to how the youth team plays such attractive football but they don’t get to see the same approach with the senior team.

This is what you call playing out from the back ?@TahithC Chong scores a beautifully worked goal for @ManUtd U19s in the UEFA Youth League ? pic.twitter.com/baQcBjYw7l

Give it to butt till end of the season

Can they play instead of the first team

Get these in the 1st team, better than some of the players they got now!

Christ – they play better football than the 1st team l

The first team would never.

Give it to Nicky Butt