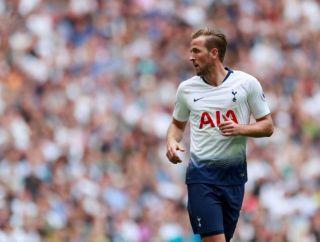 Tottenham striker Harry Kane insists he is aiming to beat Lionel Messi’s goalscoring exploits at the highest level over the next few years of his career.

The 25-year-old already has five goals to his name after seven matches in the Premier League this season and looks highly likely to challenge for the golden boot once again come May.

The Englishman has hit more than twenty goals for Spurs in each of his last four seasons with the club, most notably finishing with a tally of 30 last term behind only Liverpool’s Mohamed Salah in the scoring charts.

However, Kane is still some way behind Messi and Cristiano Ronaldo in terms of goalscoring prowess, who have both managed to score over 40 goals plus per year on a consistent basis over the last decade.

Speaking ahead of Tottenham’s Champions League showdown with Barcelona on Wednesday, the England international revealed he is targeting the same heights Messi has reached as he approaches his prime years in North London.

According to Goal, Kane told reporters on Tuesday: “He and Ronaldo have gone above the levels others set in the past.

“He has definitely set the standard for the rest of us – he still is.

“He’s still scoring goals, so it motivates me to get even better and improve. Hopefully, one day, I can score as many, if not more, than he has.”

Mauricio Pochettino’s Lilywhites will have to be at their best to contend with the Spanish champions at Wembley, especially given the fact that they lost their Group B opener against Inter Milan in Italy while Ernesto Valverde’s men dispatched PSV Eindhoven 3-0 at the Camp Nou.

Spurs cannot afford to lose any more ground in the group if they are to qualify for the next round, which means Kane will need to reproduce his most clinical form in front of goal and further back up his claims of one day matching the likes of Messi among the true greats of the game.