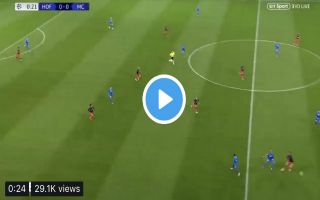 Manchester City have their first three points in Europe this season thanks to an 87th-minute strike from David Silva in Germany.

Pep Guardiola’s men looked as though they might have to settle for a point against Hoffenheim on Tuesday night in the Champions League despite dominating large parts of the game and overwhelming their Bundesliga opponents.

Ishak Belfodil opened the scoring in the first minute of the game for the hosts before Sergio Aguero equalised for City 15 minutes later.

The Premier League champions squandered several great opportunities to take the lead and were looking more and more frustrated as the game wore on, but Silva popped up to grab the decisive goal late on.

The Spanish midfielder dispossessed Stefan Posch at the back and rifled the ball into the net to send the away fans into raptures and ensure that City got off the mark with their first win in Group F.

Typical David Silva goal, nicking the ball from a hapless defender before tucking it away into the far corner on the turn – 2-1! #mcfc pic.twitter.com/JjQmfhC2Wp