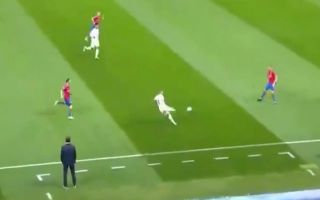 Real Madrid midfield maestro Toni Kroos doesn’t often make mistakes, but he was punished for one against CSKA Moscow in the Champions League on Tuesday night.

Without a win in their last two La Liga games, the reigning European champions would have been hoping for more success in the competition that they’ve dominated in recent years.

However, CSKA had other plans as they took the lead after just two minutes, although Kroos certainly gave them a massive helping hand.

As seen in the video below, the German international was seemingly attempting an ambitious half-volleyed pass back to a defender or even the goalkeeper, but he got it horribly wrong and it merely set Nikola Vlasic through as he made no mistake after getting into the box and broke the deadlock.

It was an horrendous bit of play from Kroos who won’t want to see this attempted pass back again, but he’ll be hoping that his Real Madrid teammates can spare his blushes by fighting back from behind in the Russian capital.