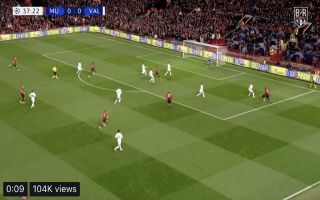 Manchester United striker Romelu Lukaku was mocked by fans on Twitter after his botched attempt to take the ball past a Valencia defender.

The Red Devils drew 0-0 with the Spanish outfit in the Champions League on Tuesday, to heap more misery on under-fire boss Jose Mourinho.

In a game of few chances, the likes of Lukaku, Alexis Sanchez and Marcus Rashford all failed to create goalscoring openings up front, while in defence the team looked shaky on several occasions on a miserable night for the home faithful at Old Trafford.

The Belgian striker did find himself in the spotlight at one point in the match, however, when he tried to bamboozle the player in front of him to advance into the box with a flurry of stepovers.

Unfortunately, he hilariously failed and ultimately lost possession, which sent fans into a frenzy on social media, as you can see below:

this Lukaku’s stepovers is like Nigeria ?? economy .: “Beautiful Nonsense” pic.twitter.com/TjeZ7EQbIp

Lukaku does stepovers like a rugby player playing football for the first time pic.twitter.com/op2zGkzIeq

Lukaku please stick to running with the ball and hitting woodworks. Stepovers are not your skill…not even on FIFA 19?