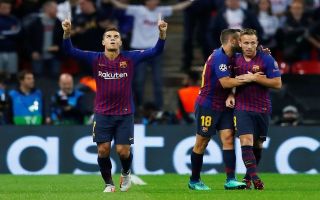 It took Coutinho only two minutes to break the deadlock against Spurs and the former Liverpool man capitalised on some bizarre goalkeeping from Hugo Lloris – who returned to the Spurs lineup this evening.

Philippe Coutinho is the first Barcelona player to score an away goal in the Champions League other than Lionel Messi since Gerard Pique vs. Borussia Mönchengladbach in 2016.

It is nice to know that Barcelona now have another star to rely on for their European nights to come in Coutinho, the 26-year-old is quickly becoming one of the most significant players for the Camp Nou outfit.

Tottenham would have hoped that the familiar foe that is Coutinho would have saved his first Champions League goal for Barcelona for another night.

Tottenham have been in worrying form recently and they may well exit the Champions League in the group stages if their slump continues.

Check out Coutinho’s goal below:

That ball from Lionel Messi ?? pic.twitter.com/DvYOtwzpSP

Coutinho joined Barcelona earlier this year in the January transfer window from Liverpool for a fee reported to be £142m according to BBC Sport.

Coutinho’s move is the third most expensive transfer in history behind only PSG’s moves for Kylian Mbappe and Neymar.

Coutinho is most certainly proving his worth for Barcelona and the Catalan giants are serious contenders to lift the Champions League trophy this season.