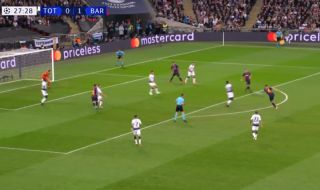 Barcelona went 2-0 up against Tottenham with an absolute screamer of a volley from Ivan Rakitic.

With Philippe Coutinho denied with his initial effort, the ball bounced invitingly towards Rakitic on the edge of the area.

From there, the Croatian’s technique was perfect as he smashed the ball in off the post to double the visitors’ lead against a hapless Spurs.