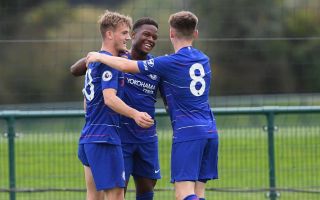 Chelsea’s Under 19s made history today by recording their biggest ever win in European competition at youth level, with a thumping 10-1 victory over Molde.

The Blues’ youngsters were clearly on top form to absolutely demolish their opponents in this extremely one-sided contest that has some fans talking about promoting this lot to the first-team.

Particularly because, as you may have noticed, Alvaro Morata and Olivier Giroud are not really doing their main duty as Chelsea’s first-choice strikers, as they’ve scored just one goal between them all season.

CFC have generally looked strong under Maurizio Sarri, but that lack of a threat up front could be a worry as the season goes on.

Our Under-19s have recorded their biggest ever win in European competition, hitting double figures and thumping the Norwegian side Molde 10-1 in the first leg of our UEFA Youth League knockout tie! ?#CFCU19 pic.twitter.com/doBjlAOayG

Some fans are therefore using this big win from their Under 19s as an opportunity to aim a dig at Morata and suggest one of these players should replace him in Sarri’s first XI in the near future.

Here’s a selection of the reactions to this impressive result:

Morata should learn this youth how to acore goals? well dun bous?

Whoever scored a brace is better than Morata.

Please who is their striker. Can Morata move downwards while he comes up? https://t.co/K6CnjrtJPa

Give talent a chance and not just sign strikers for their name/rep (Torres, morata etc.)