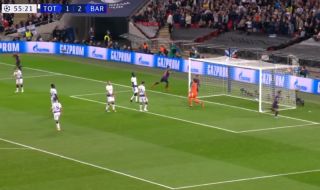 Lionel Messi has done it again with a well-taken goal for Barcelona to make it 3-1 against Tottenham.

The Argentina international has had a frustrating evening in front of goal to a large degree, having hit the post twice before finally finding the back of the net.

MORE: Video: Lionel Messi hits the post, Harry Kane goes up the other end and scores a stunner for Tottenham against Barcelona

Messi got on the end of a fine team move to give Barcelona a two-goal cushion again after Harry Kane had pulled one back.

It now looks like being two defeats in a row at the start of this Champions League campaign for Spurs after they were beaten by Inter Milan in their first game.