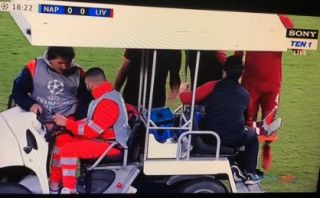 Liverpool have been dealt what looks a potentially really worrying injury blow as Naby Keita is forced off on a stretcher from the Napoli game.

The Guinea international was handed a start this evening, much to the excitement of Reds fans, but he hasn’t ended up lasting that long.

Jordan Henderson has come on in his place and Liverpool fans will hope Keita can be back on the pitch soon after shining since joining from RB Leipzig in the summer.

LFC take on Manchester City in their next Premier League game so can’t afford big names to be missing through injury.

Keita stretched off in the 19th minute, looks kind of serious and in real pain. Might miss the city game then?

Anyway, Henderson is now on for LFC after being rested on the bench for today's game ahead of City game on the weekend pic.twitter.com/dtFfynQH1n