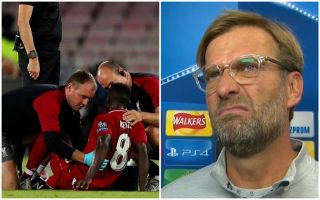 Liverpool manager Jurgen Klopp has provided an injury update on midfielder Naby Keita after he had to be stretchered off in the game against Napoli on Wednesday night.

The Reds lost 1-0 in Naples and the defeat was made even worse by seeing Keita go off looking badly hurt in the first half.

The Guinea international has looked impressive since joining Liverpool from RB Leipzig in the summer, but Klopp has now confirmed he has a back injury.

Apart from that, the German tactician could not put a time frame on the player’s return, with Paul Joyce quoting him as simply saying the club would have to wait to hear more about the situation.

Klopp on Keita: "It is a back problem. We have to wait."

That doesn’t sound too promising for LFC fans, who will be eager not to see one of their exciting recent signings spend any lengthy period out.

Klopp doesn’t have the biggest squad in world football, though he has invested smartly in recent times to put together a team that looks like it could really do something special in the Premier League or Champions League this season.

Having players like Keita available will no doubt be crucial to that, however.

UPDATE: BBC Sport report that Keita has been taken to hospital for checks on his back injury and it’s not yet known when he’ll be discharged.