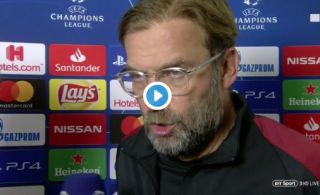 Liverpool manager Jurgen Klopp has hinted his own tactical blunder might have been one of the main reasons for his side’s defeat to Napoli.

Speaking in the video below as the German tactician reflected on the Champions League loss, he explained that he felt the formation was wrong, particularly in midfield.

Klopp did not exactly elaborate further on what he felt didn’t work about the set-up, but he generally accepted his side deserved to lose tonight.

Lorenzo Insigne scored late on to hand Napoli a 1-0 victory and undo that great Liverpool result from their first game against Paris Saint-Germain.

"The defeat is deserved."

"We made a mistake and they were on their bikes."

Jürgen Klopp has no complaints with his side's defeat in Naples… pic.twitter.com/KpB1RNeUy6