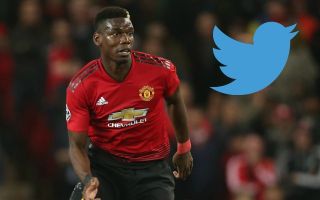 They say social media can be a real force for good and help footballers connect with fans in a way they haven’t ever quite been able to before.

Players at the biggest clubs like Manchester United, Real Madrid and Barcelona can interact and engage with supporters all around the world, answering Q&A’s, joining in with the banter and putting media speculation they don’t like to bed by calling it out directly to their followers.

Then again, if they’re not playing particularly well and miss out a comma in a tweet they can be the subject of some quite ridiculous attacks from keyboard warriors without much else to do.

Now an ordinary person like you and I might see that and just think ‘yeah fair enough, he’s calling on United to keep on fighting’, there are genuinely a few out there who think he’s honestly gone out and said to his 5.88 million followers that he wants to continue fighting the club itself.

This comes as the Sun have reported the France international has been gagged from talking about the Red Devils after some recent comments that have been perceived as digs.

This lot think Pogba wants United to fail and that he’s publicly saying he’s going to keep working to make sure they do.

If you ask us, we think he probably just got his punctuation a bit wrong as many of us do…but read these and make your own mind up…

This is why commas are important. https://t.co/4Vv4xd3snz

That’s the point Paul. You need to stop fighting United!

Ah, the oh so important comma. Suspiciously absent. Much like Pogba’s consistent commitment to the club. #mufc https://t.co/FOehyR73zx

Learn to use a comma Paul Pogba! https://t.co/gbsq2RmFyl

Yes, Pogba. We will keep fighting United until the club crumbles. You're doing a great job with that Btw. https://t.co/dWI1JuiJNm

The only fighting you'll be doing Pogba lad is the in-fighting in the dressing room. https://t.co/JQbSvTeoZe