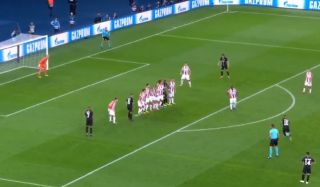 Neymar has put his anonymous display against Liverpool in the first game of this season’s Champions League behind him with some stunning work this evening.

The Brazil international has already scored twice for PSG against Red Star Belgrade, and is finally looking the kind of player we want to see in this competition.

MORE: Video: Neymar ends two careers in one move with brilliant skill for PSG in win over Reims

PSG will need magic like this from Neymar if they are to be serious contenders to finally win this trophy this season after so much investment in the side.

Frustratingly, he barely did anything in the recent defeat at Anfield, leading some to question if he can really join the elite in the way Lionel Messi and Cristiano Ronaldo have in their careers at this level.

Still, watch below as Neymar destroys PSG’s visitors with a stunning free-kick and another moments later to, most likely, end this game as a contest already…

An exquisite free-kick puts PSG into an early lead!

This Champions League night begins with a bang in Paris! ? pic.twitter.com/xWAwE6CakC