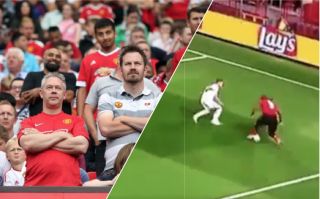 There were a fair few unimpressive points in Man United’s draw with Valencia in the Champions League on Tuesday night, however one moment seemed to stand out above the rest according to these fans.

Jose Mourinho’s side struggled to break down the La Liga outfit’s defence, with stars like Romelu Lukaku and Paul Pogba failing to take the game by the scruff of the neck and guide United to victory.

United now sit second in their Champions League group, and with the Red Devils’ next two fixtures in the competition coming against the Old Lady, it seems like United will have their work cut out if they are to finish top of their group.

One particular moment in Mourinho’s side’s match that fans noticed was when Belgian forward Lukaku attempted to do some stepovers in order to try and fool the Valencia defender that was closing him down.

The former Chelsea striker’s attempts failed miserably, something that a fair few fans hounded him for after the game.

Lukaku isn’t really known for his technical ability and vast array of trickery, however we’re sure even we could do a few stepovers without mucking them up!

Here are a few tweets from fans mocking Lukaku for his failed attempts at stepover during Tuesday night’s clash.

I did not see a worse striker than Lukako came to United in recent years pic.twitter.com/BmlR2qUSY8

I don’t know what’s worse your “US only “ videos, or that horrible step over from lukaku pic.twitter.com/vtx8TOaAi6

I think you mean shitovers

Some World class step overs there ?

Lmao wondering if he actually wears Timberlands to play soccer

his jeans too tight