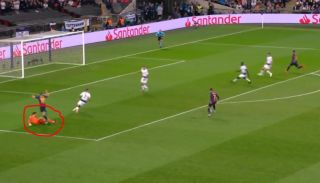 Tottenham goalkeeper Hugo Lloris was nowhere to be seen after a baffling decision in the build-up to Philippe Coutinho’s opening goal for Barcelona tonight.

Fans are pretty bemused by the French shot-stopper, who ran out to try and claim a long pass forward by Lionel Messi.

MORE: Tottenham’s 3rd choice goalkeeper shows solidarity with No 4 as injury news dictates both should miss Barcelona clash at Wembley

As you can see in the video below, this turned out to be a pretty awful decision as it left Coutinho with plenty of the goal to aim at as he slotted home.

And here’s what fans are saying about it as they question if Lloris is still drunk after his recent drink driving charge, as reported in the Guardian.

Is Lloris still drunk? Is that the worst football pitch I've ever seen? So many questions.

Would have expected the alcohol to have left Lloris’ system by now, but there you go

lol spuds…lloris still got a few beers in the system