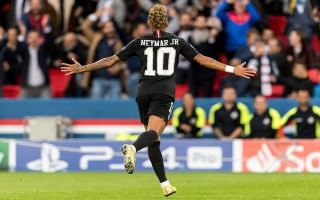 Samba superstar Neymar silenced fans who have questioned him in recent weeks with a sensational hat-trick against Red Star Belgrade this evening.

Neymar completed his hat-trick in the 81st minute, scoring his second free-kick of the game.

PSG ran out as eventual 6-1 winners this evening and they will be building towards coming out on top in their ‘group of death’ alongside Napoli and Liverpool.

Check out Neymar’s free-kick which sealed the hat-trick in style below:

Neymar completed his hattrick with a second stupendous free-kick!

Check out some reaction to Neymar’s hat-trick below:

Neymar has now been directly involved in 49 goals in 49 Champions League games in his career:

Most goals by Brazilian players in the Champions League (excl. qualifying):

On the verge of a record. pic.twitter.com/hk4t5F0SUp

Neymar will certainly remember this night for a long time to come given the records the attacker has broken this evening.

Neymar has managed to silence his critics and win himself a place in the history books alongside some of Brazil’s greatest players on the same night.