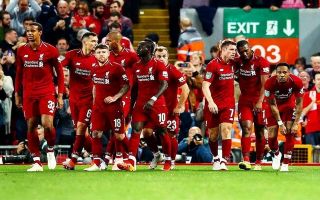 Liverpool ace Mohamed Salah was spotted looking a little lonely as the Liverpool team arrived for their Champions League tie against Napoli this evening.

Salah is experiencing a goal drought of sorts with the Egyptian only managing one goal in his past six games, the winger so far hasn’t looked as though he will hit the heights he did last season.

Salah shocked the world to set a new Premier League record of 32 goals from a 38-game season.

Salah came as close as you possibly can to scoring on Saturday evening against Chelsea but his effort was cleared off the line by the impressive Antonio Rudiger.

While many of the other Liverpool players can be seen walking together, Salah looks a little separate from the group, lost in his own world with his headphones in as he perhaps re-focuses in a bid to get back to his best form tonight.

Salah will be hoping the Champions League group stage encounters afford him the opportunity to get back to his best as Jurgen Klopp’s men look to mount a serious challenge for Premier League and Champions League glory.