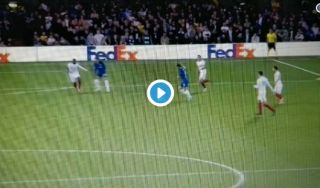 One Chelsea fan has dubbed Alvaro Morata ‘allergic to goals’ after missing another big, big chance for the Blues tonight.

Maurizio Sarri’s side are in action against MOL Vidi in the Europa League but are struggling to break them down so far.

It’s 0-0 at the time of writing and Morata well and truly fluffed one of the team’s best chances so far.

The Spain international just can’t catch a break in a Chelsea shirt, with fans distinctly unimpressed with him again…

I am sick of watching Morata miss important goals. This is abhoring and painful to watch#CHEVID

How many chances has Morata missed?