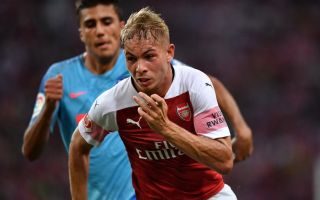 Arsenal manager Unai Emery has revealed what stands out as most impressive about wonderkid Emile Smith Rowe after his goal in the Europa League tonight.

The 18-year-old played just his third game at senior level for the Gunners, and finished off a fine move to make it 2-0 in the game at Qarabag.

MORE: Club legend singles out one Arsenal star as the team’s weakness in Europe

Smith Rowe certainly looks a player with plenty of promise who could go on to make more of an impact for Arsenal this season after catching the eye this evening.

Emery clearly saw enough in him to give him an opportunity in the starting XI this evening, and after the Spaniard’s gamble paid off he was unsurprisingly asked about the youngster in his post-match press conference.

Discussing what’s impressed him most about the England youth international, Emery said his strong mentality and willingness to learn has not gone unnoticed during training sessions and video analysis sessions in between matches.

‘If I say one condition (which has impressed me most), I say his mentality,’ Emery is quoted in the Mirror.

‘He is humble, he listens every day in training, in video analysis and before every match.

‘The last match he played against Brentford he had three actions in the opposition box and didn’t score, today he had two and scored one.’

Arsenal fans will hope Smith Rowe can prove to be their next wonderkid as they have a proud tradition of bringing through young players from their academy.