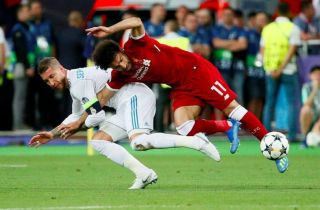 After sustaining a shoulder injury in the Champions League final last season, Liverpool ace Mohamed Salah hasn’t quite been at his impressive best since.

From struggling through the World Cup with Egypt as he recovered to make it back in time for the tournament in Russia, to his early-season form with Liverpool which has seen him score just three goals and provide two assists in 10 appearances.

The 26-year-old is clearly not in the same form as he was last year when he bagged 44 goals in 52 games, and while Reds fans will be hoping that he’ll improve as the weeks go on, there was a concerning glimpse at his shoulder on Wednesday night.

Liverpool fell to a 1-0 defeat to Napoli in the Champions League in midweek, and as Salah went to pass his shirt to Carlo Ancelotti, the Liverpool fans below were quick to spot the fact that he still has strapping on his shoulder.

That would suggest that the issue is still bothering him, but it’s unclear as to what the extent of the problem is or perhaps it may well even be precautionary and Salah is simply going through a dip in form which is unrelated to the injury concern.

It remains to be seen if he can pick up his form in the coming weeks and months to ensure that Liverpool stay on track for major honours this season. However, the longer he struggles to reach top form, the more the shoulder will be used as a reason behind his slump.

Clearly based on some of the tweets below, there are a few individuals who still remain less than impressed with Real Madrid defender Sergio Ramos after he inflicted the injury on Salah in a tangle in Kiev.

Salah’s shoulder is still messed up from that damn Ramos. Is it any wonder he has fallen from grace? My poor boy. I just want to hug him ? #LFCFamily #LFC #MoSalah #YNWA #NAPLIV #Liverpool #LiverpoolFC pic.twitter.com/0frArPFn6J

damn you Ramos, just look at his shoulder.

Interesting to see the bandaging on Salah’s shoulder there when the shirt came off…perhaps bothering him more than we thought?

I think salah arm injury is still disturbing him

He’s still not right. If we can stay close to Man City. Get some good results in Europe while the team gets back playing like last season. Salah’s performance wouldn’t effect us. But keep him playing.

Note how he is still strapped on his shoulder. So maybe we all need to guve the lad a break ffs.

I’m surprised he didn’t have surgery on that shoulder. Feel like if the WC hadn’t been on it would have been done.