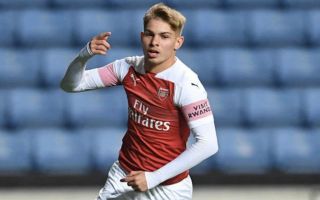 Emile Smith Rowe becomes the second youngest Arsenal player to score in Europe after netting his first goal for the senior team against Qarabag.

The 18-year-old doubled the Gunners lead in Azerbaijan after 57 minutes, sliding the ball underneath the opposition’s goalkeeper after advancing into the box to get on the end of an Iwobi pass.

Unai Emery’s men are currently 3-0 up with time quickly running out after dominating the majority of the game to continue their superb form over the last few weeks.

MORE: Club legend singles out one Arsenal star as the team’s weakness in Europe

Sokratis grabbed the first goal of the game, while Matteo Guendouzi added the third after 79 minutes, but Smith-Rowe will rightly take all the plaudits after capping off a fine individual display with his landmark strike.

According to AFC Stuff on Twitter, at 18-years and 67 days old the teenager starlet goes into the record books just behind Alex Oxlade Chamberlain, who scored his first goal in the Champions League against Olympiakos back in 2011, just 23 days younger than Smith-Rowe.

Emile Smith Rowe, at 18 years & 67 days old, is Arsenal’s second youngest English goalscorer in European competition after Alex Oxlade-Chamberlain, who was 18 years and 44 days old when he scored against Olympiakos in 2011. [@JakeEntwistle] #afc pic.twitter.com/oqd8IzlV7z

It looks as though Arsenal fans have a new hero and they will hope to see him in action again in the coming weeks as the fixtures pile up for their team on European and domestic fronts.