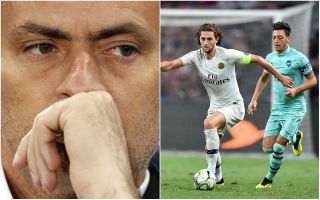 Manchester United are one of the few top clubs not to be linked with an interest in sealing a potential Adrien Rabiot transfer move in the near future.

As pointed out on Transfermarkt, the France international is due to be out of contract with Paris Saint-Germain at the end of this season, meaning he could potentially move to Old Trafford on a free next season or on the cheap in the middle of this campaign.

Rabiot is undoubtedly one of Europe’s top young midfielders and could be a superb addition to this struggling United side, especially as they struggle to keep hold of Paul Pogba.

MORE: Jose Mourinho potentially just days away from sack after shocking everyone at Manchester United

The latest on that front comes from Don Balon, with the Spanish outlet claiming both Real Madrid and Barcelona are keeping an eye on the 25-year-old’s situation, with the player likely to leave if Jose Mourinho remains as manager but potentially being persuaded to stay if Zinedine Zidane replaces him at United.

United have already had to deal with the blow of Michael Carrick retiring in the summer, while new signing Fred has taken some time to settle in and players like Ander Herrera and Nemanja Matic don’t really look enough to form the kind of quality midfield the club so badly needs.

Rabiot could so obviously fix a lot of issues in this United side with his intelligent play, and that is evidenced by the fact that so many big names seem to be in for him.

Last month, ESPN claimed Liverpool were after him – and they arguably already have a much stronger midfield than United anyway! Missing out to a rival in that kind of situation would undoubtedly be a bitter pill to swallow.

Adrien Rabiot would be a fine signing for Manchester United

As beIN Sport also claim Rabiot has rejected a fresh contract offer from PSG, the Daily Mail claim the likes of Chelsea and Juventus are also showing a big interest in the 23-year-old.

Again, these are not clubs who urgently need to bolster their midfield more than United, with the Blues in particular looking so strong this season after signing both Jorginho and Mateo Kovacic to quickly turn their fortunes around after finishing three places below Jose Mourinho’s side last season.

So often United have splashed the cash on players without necessarily taking much consideration into whether or not they fit into the squad – with Pogba and Alexis Sanchez prime examples in this current side, while Angel Di Maria and Memphis Depay are other notable recent flops who did not come cheap.

Rabiot would be a move away from this – a potential bargain who has his best years ahead of him to develop and improve into precisely the type of player United need, if he hasn’t that already.

Fans should hope in the coming months that they work this out and swoop in for him fast – or they’ll surely regret it.