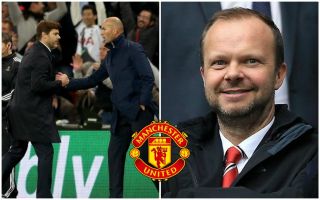 Manchester United have opened talks with Tottenham manager Mauricio Pochettino over replacing Jose Mourinho at Old Trafford, it has been revealed.

A club source has confirmed to CaughtOffside that Ed Woodward and co. have sounded out Pochettino over a future switch to United from their Premier League rivals Spurs.

Despite plenty of talk that Zinedine Zidane could be in line to replace Mourinho, those links have cooled of late and it seems Pochettino is the preferred option.

This was recently claimed by the Independent, who suggest other names may also be in the frame, but the impressive Argentine tactician is the leading candidate after his tremendous work in north London.

Former Chelsea boss Antonio Conte also appears to be in consideration after his strong work at Stamford Bridge, though initial contacts have now been made over luring Pochettino to United.

CaughtOffside understands a move for Pochettino in the middle of the season is highly unlikely, though the club are keen to establish as soon as possible if he’d be keen on the job any time soon, perhaps in the summer.

‘My understanding is United have started the process of sounding him out for the job in the future, even if it’s unlikely they’ll get him straight away,’ a club source revealed to CaughtOffside. ‘There are other candidates but Pochettino is seen as by far the most ideal for the moment. Ed (Woodward) and others on the board are all in agreement on that.’

The 46-year-old has never won a major trophy unlike Zidane and Conte, but he has worked on a shoestring budget at Tottenham and turned them into one of the most formidable teams in Europe, making them regular title contenders and competitors in the Champions League.

One can only imagine what he’d do with this talented and under-achieving Red Devils squad, with Paul Pogba and Alexis Sanchez not looking the right fit under Mourinho at all.

Reports have suggested Mourinho may now have just one game to save his job, though the club may also hold off pulling the trigger if they cannot land Pochettino until the summer.

UPDATE: CaughtOffside understands United players are increasingly disillusioned with life under Mourinho and want him gone to prevent a full meltdown between now and the end of the season.

It is also understood senior figures at the club are ready to take players’ concerns on board and a bad result against Liverpool this weekend could be enough to begin the process of a full-out assault to bring Pochettino in to replace Mourinho.