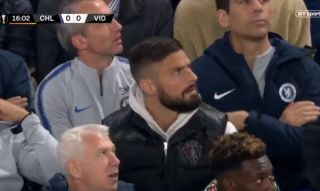 We’ve got another, improved video of the Alvaro Morata miss for Chelsea against MOL Vidi – this time with added reaction from his team-mate Olivier Giroud.

Both strikers have been pretty poor for Chelsea this season, scoring just one goal between them in all competitions.

Morata missed another great chance for Chelsea that’ll have fans baffled at his total lack of form in 2018 in particular.

Giroud also looked pretty stunned, as he frowned with bemusement, presumably watching a replay of it back on the big screen…

What a chance for Alvaro Morata…

1 goal in his last 17 Chelsea appearances ?