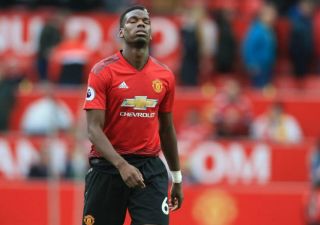 Barcelona and Juventus have reportedly emerged as the two likely destination options for Paul Pogba if he leaves Man Utd next year.

As noted by Sky Sports, all is not well between the French midfielder and boss Jose Mourinho currently, with tension building on and off the pitch as United continue to falter this season.

They’re now winless in their last four games in all competitions, and with talk of unrest amongst the squad, it remains to be seen if they can bounce back this weekend when they host Newcastle United at Old Trafford.

Transfer speculation relating to Pogba’s future seemingly refuses to go away though, with Tuttosport noting that reports in Spain have claimed that if the 25-year-old leaves Manchester next year, he wants to join either Barcelona or Juventus, ruling Paris Saint-Germain out of the equation.

As noted by The Telegraph, it could cost either European giant €150m to prise Pogba away from United, while the same report raises doubts over Barca’s ability to afford such a deal given their current wage bill.

Having splashed out on Cristiano Ronaldo this past summer, it’s questionable if the same applies to Juventus, and so it remains to be seen if such an exit materialises next year.

Nevertheless, a return to Juve would arguably be the best solution for the player himself, as instead of testing himself in a new league and starting over in a side that he may not be a perfect fit for him given their style of play, a return to Turin where he enjoyed great success could be an ideal option.

Pogba emerged as one of the most talented midfielders in Europe with Juventus, and although his stint with United hasn’t worked out as planned to this point, a second spell with the reigning Serie A champions could be what he needs to get his career moving in the right direction again.

However, much can change between now and January or indeed the end of the season. From rediscovering his best form and settling or to a potential Mourinho exit if results don’t improve. It’s undoubtedly still too early to suggest that Pogba leaving Man Utd is a certainty.