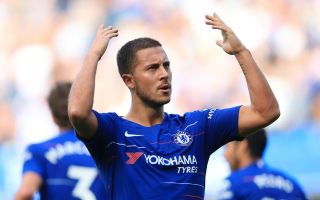 Chelsea winger Eden Hazard has revealed who he believes are the four best footballers in the Premier League, ahead of himself.

The Belgian star has been fantastic for the Blues at the start of the season, scoring six goals in his first seven Premier League games this term.

The 27-year-old seems to be hitting new heights under Italian boss Maurizio Sarri, who succeeded Antonio Conte in the hot seat at Stamford Bridge this summer.

SEE ALSO: ‘No other words…a disaster’ – Chelsea loanee slammed by Italian media, named flop of the match after poor display
Sarri wants Chelsea star to ‘restart’ his career after match-winning display in Europe
‘A cancer in this squad’ – Chelsea star slammed for poor performance vs MOL Vidi by furious Blues fans

Hazard’s match-winning displays have earned him widespread praise from experts and fans alike, while also helping to drive Chelsea towards the top of the table.

However, according to the Mirror, the talismanic attacker doesn’t think of himself as the best player in England, as he named four players he considers to be ahead of him in an interview on Friday.

“Maybe for you, it’s people who score more goals, another one is not thinking about that,” Hazard told reporters.

Sarri’s men take on Southampton away from home on Sunday in their latest Premier League outing, while the only two teams above them in the table, Liverpool and Manchester City, play each other at Anfield later on the same day.

If the Blues can emerge victorious they will leapfrog their rivals into the top spot, albeit temporarily, but they could potentially occupy that position outright if the Reds draw with City.

Supporters will be hoping that Hazard delivers the goods once again to help extend Chelsea’s unbeaten run at the start of the 2018-19 campaign.

Just one of a host of brilliant performances by @HazardEden10 in September! ?

Make sure to vote for him as your @EASPORTS @PremierLeague Player of the Month!
Vote ? https://t.co/9bBgZcoQ93 pic.twitter.com/Xd8TbYKlkh