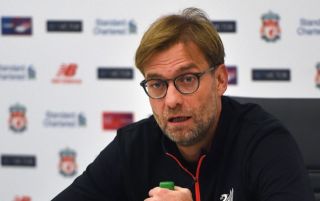 Liverpool boss Jurgen Klopp has yet to rule out Naby Keita from featuring against Man City on Sunday after his injury setback in midweek.

The 23-year-old was stretchered off against Napoli in the Champions League on Wednesday night, with what appeared to be a back injury.

Klopp has confirmed that it is indeed his back which is causing the problem, but it’s not expected to keep him sidelined as the German tactician has even suggested that he could yet feature against City at Anfield on Sunday.

That will be a boost for him if he is available, as it gives the Liverpool boss another key option in midfield with Keita impressing thus far in his nine appearances in all competitions.

Nevertheless, the Reds still have the likes of Jordan Henderson, Georginio Wijnaldum, James Milner and others to call upon to play in midfield, and so Klopp will likely be confident in those at his disposal even if Keita isn’t able to feature.

With the international break coming up though, it gives the Guinea international the potential opportunity to rest his injury and recover fully in time to be ready for when Liverpool take on Huddersfield on October 20.

However, given the magnitude of the game this weekend with the top two sides clashing, the ideal scenario is one which sees Keita available for selection against Pep Guardiola’s men and there is still a chance of that happening based on the Liverpool manager’s comments on Friday.

Jürgen Klopp on Naby Keita: “We will have to wait. Naby had a back spasm. Didn’t look too serious, so there’s a chance but we don’t know.”#LIVMCI https://t.co/NjS1bMGI32