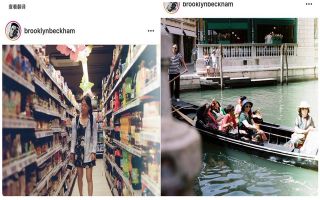 David Beckham’s eldest child Brooklyn has found himself in hot water after posting some pictures of asian tourists in Italy to Instagram.

19-year-old Brooklyn has been accused of ‘racism’ after uploading pictures of Asian tourists sitting on a Gondola as well as posting another image of an Asian woman in the aisle of a supermarket.

Brooklyn has now been labelled a ‘racist’ online for his disrespectful caption and has also been reprimanded for uploading the picture of the Asian woman in the supermarket without obtaining her permission.

If under the exact same circumstances, exact same captions, only two pictures with a bunch of black tourists or even Islam tourists, Brooklyn Beckham would be out and apologized long times ago. Just bc it’s Asian racism so no one care lmaoooo typical white privilege

When it comes to Asian racism, no one cares, #BrooklynBeckham is just another spoiled brat, period ! ??? learn to respect other people! #racism

#BrooklynBeckham the color of them doesn’t matter, whether they are Chinese or not doesn’t matter. The problems are: 1. U DONT POST PPL’S FACE WITHOUT PERMISSION; 2. PPL TRAVEL 2 FOREIGN COUNTRIES & THAT’S Y V CALL THEM & YOU “TOURISTS”#racistbeckham

no racist like Brooklyn Beckham cuz he’s the worst ever. Racism against not just Asians cuz Italy is all white in his mind.#racistbeckham #racists #beckham https://t.co/9HMN5gdJpM

Imaging if Brooklyn Beckham doing the same thing to black people, his ass would be dragged 4 hours ago

Hey Brooklyn Beckham. Perhaps you can ask that lady first if you want to take a photo of her. Besides, don’t act like you never go to a Chinatown. Kid there are so many things you have to learn. Don’t make the judgment easily. Finally, don’t play with fire and don’t be a coward.

Honestly speaking nobody needs your piece of fucking mind. They’re all enjoying their beautiful time until you decided to make a comment abt it. I guess being born into the Beckham family doesn’t necessarily means you have a working brain. So fucking sad for you @brooklynbeckham

Brooklyn Beckham’s noble imagination of Western world was hurt by the appearance of Asians. LMAO. Don’t know he’s such an Italian culture expert, before this I would only thought he was uneducated, now it turned out he’s uncivilized. ? A racist&a dumbass comfirmed.

Having a ton of asian tourists = this place is international and worth going even if it means flying across the whole continent.
You posting random pic abt an asian tourist & saying it’s not “italy” anymore = a fucking racist douchebag. @brooklynbeckham

See More: ‘If Manchester United were playing in your back garden this weekend while Liverpool and City were on the TV, you would stay inside and draw the curtains.’ – Former Manchester United ace blasts the current state of Jose Mourinho’s side

Brooklyn will no doubt have to offer a sincere apology very soon and his actions aren’t the only time the Beckham family’s reputation has come under question in recent weeks.

David Beckham was slated last week for his use of a legal ‘loophole’ to avoid a speeding offence.