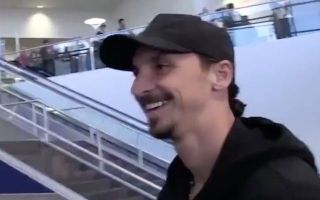 AC Milan have been linked with a January swoop for Zlatan Ibrahimovic, and the man himself has now responded to that transfer speculation.

As noted by Goal.com, Milan sporting director Leonardo addressed the rumours on Thursday night and suggested that it wasn’t something that was possible for the club right now.

SEE MORE: ‘No other words…a disaster’ – Chelsea loanee slammed by Italian media, named flop of the match after poor display

However, Ibrahimovic appeared to leave the door open when quizzed on it by TMZ Sports, as seen in the video below, where he suggested that he’s content with the idea of the ‘whole world wanting him’.

The 37-year-old is currently enjoying a productive spell with LA Galaxy where he has wasted no time in making himself a fans favourite.

Nevertheless, given his previous successful spell with the Rossoneri coupled with the fact that he seemingly could do a job at the highest level still and Milan are in need of additional quality and depth up top, it seems to make sense for all parties concerned if he sealed a temporary return to the San Siro in the MLS off-season.

Time will tell if the switch materialises, but based on his comments below, it seems fairly certain that Ibrahimovic is going to soak up the attention and rumours for a little while longer…

Ibrahimovic to @TMZ_Sports about the Milan rumours:

“There is always rumors. The whole world wants me. It’s okay.” pic.twitter.com/yyyN9sYK8A