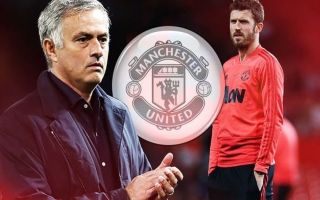 I strongly believe that amidst all the turmoil at Old Trafford that Michael Carrick is the key to getting United’s season back on track.

A report published by the Mirror Sport earlier stated that Jose Mourinho’s time as manager will come to an end this weekend, with senior United officials ready to drop the axe on the decorated manager regardless of the side’s result against Newcastle tomorrow.

It is understood that Carrick will take temporary charge of the team whilst the club irons out a potential deal to make Zinedine Zidane the next permanent manager of the Red Devils.

37-year-old Carrick has been working as a part of Mourinho’s coaching team since he retired from playing at the end of the 2017/18 season.

Carrick made a whopping 464 appearances for United during his 11 years playing for the club, when the midfielder eventually decided to hang up his boots fans finally realised how significant Carrick was to their success.

It's been 12 years since Michael Carrick made his debut for Manchester United. To this day, he remains one of the best & most underrated players in the club's decorated history.

A man who was criminally underrated during his playing career now has the opportunity to rally the troops and lead United to potential success this season.

Carrick is regarded as a true professional and seen as a role model by his peers across the footballing world and what better man to offer United short-term help as they still seem to be recovering by the void left by the great Sir Alex Ferguson.

Carrick is in a unique position as one of the club’s legends who is actually able to make the changes necessary to prevent United from becoming world football’s next ‘fallen giant’.

Other United legends like Gary Neville and Rio Ferdinand have turned to punditry in their post-playing careers leaving them unable to step in and take the reigns at United.

Ryan Giggs for so long was touted as United’s next permanent manager but Giggs has only recently started his journey in managing his country, Wales.

For these reasons Carrick could be the perfect short-term fix for the Red Devils. Carrick is respected by the players at the club and would certainly ensure that the club’s value and identity translate to the players on the pitch.

As a former player, Carrick can ensure that the attacking, free-flowing style of football United fans want to see finds its way to the pitch sooner rather than later.

I have no doubt that Carrick taking charge as caretaker manager will motivate the players to go out and perform for the badge in a way that they haven’t shown enough desire and passion to do in a long time.

I can’t think of anyone better to steady the ship at United than Carrick.