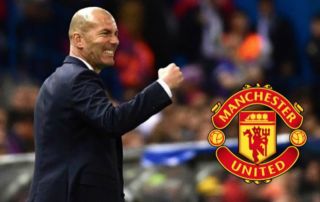 Zinedine Zidane has reportedly turned down an offer from Juventus to become the club’s director of football, amid Manchester United speculation.

According to the Daily Star, the Frenchman has been heavily linked with the managerial role at Old Trafford in recent months, as current boss Jose Mourinho’s poor start to the 2018-19 campaign continues.

The Red Devils are nine points behind Manchester City and Liverpool in the Premier League after seven games and out of the Carabao Cup, while they might also have a fight on their hands to qualify for the last-16 of the Champions League.

A 0-0 draw with Valencia at the Theatre Of Dreams on Tuesday saw Mourinho’s men drop two valuable points in Group H, which followed up a dismal 3-1 defeat against West Ham in the league last Saturday.

Many pundits and fans are suggesting that the Portuguese boss is on borrowed time in his role at the club, but he is still hanging on in there ahead of a clash with Newcastle United this weekend.

However, in a new twist to this ongoing story, Zidane has rejected advances from Juventus in Serie A, who had been hoping to appoint him as their new director of football, as Calcio Mercato reports.

The former France international left his post as Real Madrid head coach back in May after guiding the club to a third successive European Cup win and has been out of work ever since, despite a lucrative offer from the United Arab Emirates, according to Calcio Mercato.

The Italian publication states that Zidane is happy to wait for his chance at Man United and wants to keep hold of the Champions League come May by turning the club’s fortunes around on the pitch.

Red Devils supporters may be excited by this latest update given the miserable mood surrounding the club in recent weeks, but at the moment Mourinho is still in charge and he still has the chance to re-ignite the team’s season, starting with Saturday’s game against the Magpies at Old Trafford.