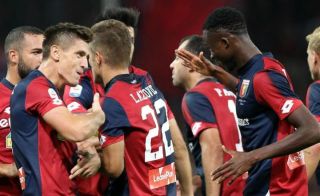 Genoa striker and Barcelona target Krzysztof Piatek has seemingly dropped a major hint that he perhaps sees his future elsewhere next season.

The 23-year-old has been gaining plenty of attention in Italy, as he’s bagged 12 goals in just seven games in all competitions since his summer switch from his homeland.

Having taken to Italian football so well while showing a real clinical edge in front of goal, it’s natural that he will attract interest from elsewhere and Sport note how Barcelona have been paired with a swoop while Chelsea are also considering a move, as per Calciomercato.

While it isn’t an outright admission that he intends on leaving at the end of the season, Piatek has dropped a hint over his future as he evidently can’t guarantee that he will still be a Genoa player if he continues his current form.

“Last year I was sure I would join a better league,” he told La Gazzetta dello Sport. “Now I’ve only been here for two and a half months, and I don’t know where I’ll be in the next six.”

It’s noted by Calciomercato that his early season goalscoring form has resulted in his valuation rising to €40m, but it will be interesting to now see if he can maintain his impressive start and prove that he can consistently deliver across an entire campaign.

If he does that, not only will that price-tag increase further, but it will surely spark the likes of Barcelona and Chelsea into action with the likes of Luis Suarez and Alvaro Morata struggling to deliver consistently themselves.

Piatek is showing a real eye for goal for Genoa, and while the Serie A outfit will surely be desperate to keep hold of him for as long as possible, it should still represent great business in terms of the profit that he’s likely to make them in the future.