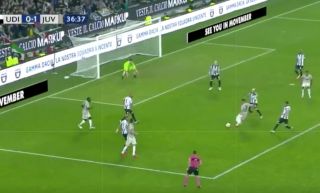 Cristiano Ronaldo put his rape allegations aside this afternoon, as the former Real Madrid star scored a fine left-footed finish to give Juventus a 2-0 lead against Udinese.

It was reported by Der Spiegel that a woman has accused Ronaldo of raping her back in 2009, claims that haven’t seemed to affected the winger’s game if this goal is anything to go by.

Ronaldo’s goal was a stunner, as the Portuguese superstar latched on to a pass from Mario Mandzukic as he fired home with his weak foot to give the Old Lady a 2-0 cushion just before half time.

Here’s a clip of Ronaldo’s goal, one that shows that even in times of controversy, the forward is still capable of pulling stunners out of the bag.