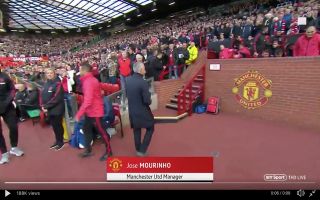 Jose Mourinho showed the world that he was cool, calm and collected despite his job hanging in the balance ahead of Manchester United’s clash against Newcastle.

It was sensationally reported by The Mirror last night that Mourinho would be sacked regardless of the outcome of today’s tie with Newcastle.

The pressure has been mounting on Mourinho in recent weeks with the club enduring their worst start to a season in 29 years which has been seen the Red Devils fall to shock defeats against Brighton, Tottenham and most recently West Ham.

Check out the video of Mourinho making a ‘splash’ below:

Jose Mourinho has some fun with the cameras ahead of Man Utd's match ? pic.twitter.com/hJEGt87l9m

Mourinho seemed to be in good spirits despite his job hanging by a thread heading into tonight’s encounter.