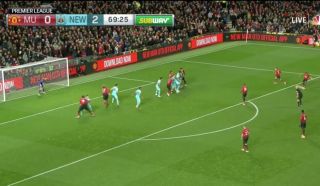 Juan Mata scored a superb free-kick for Man United this evening as he gave Jose Mourinho’s side a route back into their clash with Newcastle.

The away side were 2-0 up before Mata’s superb set piece, as both Muto and Kenedy scored in the first 10 minutes to give the Magpies a dream start.

The Spaniard then gave United a lifeline in the second half, as his free kick from the edge of the box was fantastically executed, as it beat Martin Dubravka in the Newcastle goal.

Here’s a clip of Mata’s strike. An absolute peach of a free-kick!

What a freekick from Juan Mata!
1-2
C'mon boys!#MUNNEW #MUFC pic.twitter.com/sVnbopxm33