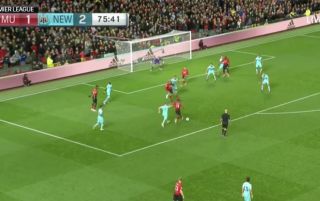 French duo Anthony Martial and Paul Pogba combined brilliantly for Man United this evening to draw them level with Newcastle in their clash at Old Trafford.

The home side were 2-0 down going into the 70th minute, however a free-kick from Juan Mata gave the Red Devils a lifeline, before Martial equalised for Jose Mourinho’s side with around 15 minutes to go.

Martial played the ball into Pogba, whose back-heel found the winger, as he slotted home past Dubravka for United’s second of the match.

Here’s a clip of Martial’s strike, one that we’re sure United fans will be watching back for years to come.

Talk about this goal! What an assist from Pogba and what a brilliant finish from Martial! pic.twitter.com/JDh6GtdfIz