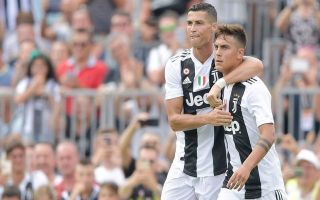 Juventus ace Paulo Dybala has revealed when he believes Cristiano Ronaldo decided that the Turin giants would be the club he left Real Madrid for.

The 33-year-old opted to end a glittering spell at the Bernabeu this past summer, starting a new challenge in Turin with the Bianconeri.

SEE MORE: How Juventus could line up vs Udinese: Cristiano Ronaldo returns, quartet could miss out

While it offers him a very good chance of winning more trophies given their active run of seven consecutive Serie A titles, Ronaldo will also have been brought in by the Italian giants to help end their wait for glory in Europe.

As a five-time winner, he has real pedigree in the Champions League, although while Dybala believes that his Real Madrid side were lucky to overcome Juventus last season, the win over the reigning European champions at the Bernabeu was in his opinion the game that convinced Ronaldo that Juve were the right choice for him if he left.

“I don’t think there was a stronger squad than Juve last season. It’s true Real Madrid won, but they did not prove themselves to be stronger than us,” he told La Gazzetta dello Sport, as noted by Football Italia.

“I think it was that game that pushed Ronaldo towards Juventus. That’s when he realised our strength and made his choice. He is very intelligent and sees things before others.”

With the talent around him, it’s fair to say that Ronaldo has what is necessary to ensure that he continues his proud record in the Champions League moving forward.

After a slow start, he’s begun to pick things up domestically with three goals and five assists in seven games in Serie A so far this season. With things beginning to click into place, it would suggest that perhaps Dybala has a point and Ronaldo appreciated what a move to Juventus could result in as early as last season.

Coupled with the standing ovation he got in Turin for the stunning overhead kick he scored against them in the first leg of that tie, it seems like it was always going to be on the cards.