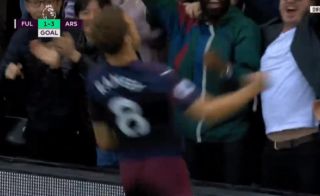 Aaron Ramsey has just scored a sublime flicked goal for Arsenal to finish off another beautiful team move away to Fulham this afternoon.

Both of Alexandre Lacazette’s goals were quality as well, but this counter-attack is truly breathtaking as the likes of Hector Bellerin, Henrikh Mkhitaryan and Pierre-Emerick Aubameyang play their part in tearing Fulham to shreds.

Ramsey then applies the finish with a clever little flick into the far corner, showing his immense intelligence and technique when he’s at his best.

Unsurprisingly, following claims from BBC Sport that Arsenal have pulled out of contract talks with the Welshman, these fans are now urging them to pay him whatever he wants!

If this don't get goal of the season there's something majorly wrong pic.twitter.com/cDxAA1mCwj

Pay the man what he is worth arsenal #ramsey

Pay Ramsey whatever amount he wants!

A celebration from Aaron Ramsey saying to Arsenal board – 'That's what you are losing if you don't pay up'. Absolute madness if Arsenal don't find a way to keep hold of the Welshman #FULARS https://t.co/jwdDBJiRsA

I beg you pay Ramsey @Arsenal

If we sell Ramsey I will kill everyone in the arsenal board , the guy is different class