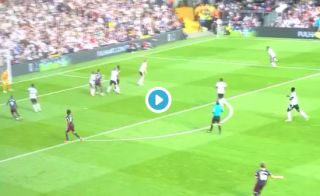 One Arsenal fan has gone as far as to compare Alex Iwobi to Lionel Messi today as he tears things up against Fulham.

The Nigerian attacker has been a joy to watch for the Gunners so far, playing a key part in Alexandre Lacazette’s opening goal.

Iwobi has generally looked hugely improved under Unai Emery this season after a couple of years of making minimal impact at the Emirates Stadium.

Now, however, he looks a confident man ready to take players on and make things happen – with this video below of a filthy nutmeg attracting plenty of attention in particular…

Fans are loving what they’re seeing from Iwobi, with these the best tweets on the youngster’s display so far…

Do my eyes deceive me? Is this Iwobi really Iwobi?

Arsenal head coach Unai Emery deserves huge credit for the turnaround in the form of Alex Iwobi. I remember covering him play well at Barcelona v Arsenal in 2016 then scoring at Everton 72 hours later. A talent who lost his way badly. Amazing what a tougher training regime can do pic.twitter.com/wDghAFwnOP

Credit where it’s due.. Iwobi is progressing again!