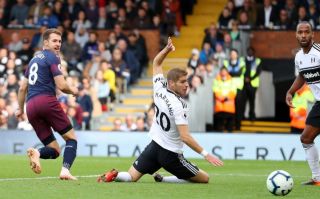 The Gunners won 5-1 away to Fulham thanks to a strong showing in the second half, having gone in at 1-1 at the break.

MORE: Video: Aaron Ramsey scores sublime third goal for Arsenal and these fans have a message for the club board

Alexandre Lacazette scored the first two goals for Arsenal, but from that point on it was all about the quality play of Aubameyang and Ramsey.

And according to Opta, the pair made Premier League history by both scoring and assisting in the match – the first time two substitutes have managed this in the same game.

This just puts the icing on the cake for Arsenal fans after a hugely convincing 5-1 away victory against a strong Fulham side who spent well in the summer.

It also makes it nine wins in a row for Unai Emery in all competitions now after he started with consecutive defeats in his first two games since taking on the high-pressure task of replacing the long-serving Arsene Wenger in the summer.

It seems the Emery project is well underway now, and this performance today must be their best so far this season, with Aubameyang and Ramsey truly two of the most exciting players in this team – and clearly not bad options to have on the bench either!